The BIABC Board of Directors is comprised of volunteers from member BIA respresentatives elected by the eligible membership at the association's Annual General Meeting each spring.

Philip has been the Executive Director of the Newton BIA since 2014. He comes from a small business background being the owner of the Old Surrey Restaurant since 2007 located in the heart of Surrey, BC. He is also a Certified Professional Accountant and a graduate of the University of Victoria where he completed a Bachelor of Commerce. Philip has been a strong advocate for the community of Newton for many years.

Patricia is the Executive Director of Hastings North Business Improvement Association.  The Hastings North BIA promotes the retail and commercial neighborhood of Hastings North within the City of Vancouver. Ms. Barnes serves on a number of committees including the City of Vancouver Anti-Poverty Taskforce, the Employment Lands and Economic Review, the Vancouver Immigration Partnership, Co-Chairs Living in Community: Balancing Perspectives on Vancouver’s Sex Industry Steering Committee, Community Advisory Committee Hasting Park, and is a past Director of the International Downtown Association.  Ms. Barnes is currently the Chair of the Advocacy Committee for BIABC but has served on the Board of BIABC in the past. She is currently on the Vancouver Police Board.  She has also been a speaker and presenter at many provincial and international conferences. Ms. Barnes holds a BA from University of Toronto and MBA from Dalhousie University.

Pamela Bottomley's background includes years as a journalist - including stints with the Winnipeg Free Press, The Vancouver Sun and The Northern Miner - beofre beginning her career in public relations, strategic planning and communications management. She left her role as a PR director for a major Vancouver advertising agency in 1991 and moved to her Nanoose Bay acreage where she operated Pamela Bottomley Public Relations until joining the PDBA in September 2011. Pam is an accredited member of the Canadian Public Relations Society and has studied business law and organizational behaviour. She has served in many volunteer capacities in the Parksville community and is the past-president of the Parksville-Qualicum Fish and Game Association.

Jeff grew up in Vancouver, B.C. After graduating from UBC, Bray embarked on a 13-year career with the BC Government. In 2001, Bray was elected the MLA for Victoria-Beacon Hill. For 8 years Jeff was the Manager of Government and Regulatory Affairs for Shaw in BC. Jeff is currently the Executive Director of the Downtown Victoria Business Association. Jeff is President of the Former MLA Association of BC, Vice-Chair of the Royal BC Museum Foundation, Vice-President of the North Quadra Community Association is Co-Chair (with the Victoria Mayor) for The Greater Victoria Coalition to End Homelessness. Fun fact: Jeff is a closet Star Trek fan……..original series of course!

After 32 years running and owning a business, Bonnie moved into the world of BIAs. Currently the Operations Manager of the Downtown Surrey BIA, she has been on the Board of BIABC for seven years. She currently sits on the Conference Committee and the Partnership Committee. In her spare time, Bonnie is currently President of the Whalley Community Association; Chair of the Surrey Christmas Bureau; and a member of Surrey’s Parks, Rec and Culture Committee. Through her role at the Downtown Surrey BIA, she also sits on the Community Advisory Committee for Modular Housing and Shelters, WIST Committee (Whalley Integrated Service Team), Fusion Fest Committee, Tree Lighting Committee, and Party for the Planet Committee. 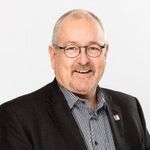 Mark was a broadcaster for over 40 years in the radio business. Over that tenure he was on-air, a production manager, promotion manager and Program Director. During his time in Kelowna at Sun FM, Mark was named Small Market Program Director of the Year for 6 consecutive years at the annual Canadian Broadcast Awards. He was responsible for the 22 radio stations in the BC Interior during 12 years in Kelowna. Mark was also an early adapter of Music Master technology helping develop the Net Send/Net Merge function to merge music scheduled locally against network scheduled music. He joined the Downtown Kelowna Association in November 2018 as Executive Director. Mark has since worked closely with Downtown stakeholders on a variety of issues realizing excellent working relationships and creating a better image for Downtown Kelowna.

Gavin is the Economic Development Manager with Downtown Vancouver BIA. His academic background is in Geography (BA, UVic) and Urban Planning (Master of Planning, Ryerson). He is passionate about affordable housing, sustainable transportation, and local economic development. Born and raised in BC, Gavin has deep family roots in the Victoria area, lived in downtown Vancouver for 10 years and just recently moved to North Vancouver.

For almost 35 years, Jeremy has consistently found himself in a leadership role, whether it is consulting for the largest multi-national military organization on leadership and organizational dynamics, or coaching small business on start-up, operations and effective strategy. Jeremy is a passionate community leader who believes in the strength of servant leadership, effective process and policies, and the power of people (People, Process, Profit). Regardless of his role, Jeremy leans in and commits to finding the pathways which best serve the most people possible while focusing on the greatest outcomes.

Teri, her husband Bob and their four children moved from Victoria to Langley in 2001 and immediately fell in love with the community. This was probably a very good thing because within six months of moving, she became the Executive Director of the Downtown Langley Business Association and in 2005 became the newest member of Langley City Council. Teri has been working for the DLBA since October 2001 and has sat on numerous panels, committees and advisory Boards in this role. Having served on City Council from 2005 to present day has provided Teri with much insight as to how BIAs and local government can work together productively and ensure that everyone gets along in the same sandbox. In September 2017, the DLBA was awarded Langley City’s tourism contract, Discover Langley City, and she now oversees both the DLBA and Discover Langley City in her role as Executive Director. Teri brings an honest, pragmatic and insightful look into what works, what doesn’t, and how all of these entities can support each other while respecting each other’s boundaries.

Since 2004, Isabel has served as the Executive Director of the Heights Merchants Association, a BIA in Burnaby with approximately 350 businesses and 150 property owners. She has served on the BIABC Board in two different periods (once, in the mid-2000s, and again since 2017 until now. She has 30 years of experience working in communications strategy and marketing, community relations, publishing and events. More than half of that time was spent in economic development, including a stint in Ukraine with a business improvement NGO. She has worked in the public, private and non-profit sectors, and has owned her own business. Isabel has a degree in Communication and a post baccalaureate diploma in Community Economic Development (both from SFU). Isabel is committed to strong, connected communities, and sustainable and cooperative economies - with vibrant business districts at their core. Over the years, Isabel also served on the Boards of Volunteer Burnaby and Volunteer Grandparents, as well as various Burnaby Board of Trade Committees (including the Business Recovery Task Force during COVID-19) and the City of Burnaby Environmental Sustainability Strategic Task Force.

Laurey-Anne Roodenburg is the Executive Director for the West Quesnel Business Association, located in Quesnel, BC. This small unique BIA is one of three in the City of Quesnel.  Despite being the smallest of three, WQBA is located on the west side of the Quesnel River and offers unique and eclectic opportunities for the community to shop and participate in community minded events, such as Christmas in the Village, August Night Market, Billy Barker Days Slam Jam, and the Great West Butter Tart Competition.  If you have a chance to visit Quesnel, don’t hesitate to come on over to the “West Village”, where we can meet all your shopping needs.

Teri is a leader in community and economic development. Her career with BIAs spans 17 years and four different commercial districts across the Lower Mainland. Currently, she is the Executive Director of the Robson Street Business Association (RSBA) in Downtown Vancouver and is completing her fourth year on the BIABC Board. Teri is an active member of the Vancouver BIA Partnership and a past member of the IDA Canada Leadership Committee. She holds a Bachelor of Arts Degree from Simon Fraser University where she completed a double major in criminology and psychology. When not working, she’s a busy mom of two and can often be found on the soccer field cheering on her kids, baking up a storm in the kitchen or planning new travel adventures.

Peter completed the UBC Masters program in Community and Regional Planning in 1992. He joined the Planning Department in 1993, where his first assignment was planning for the revitalization of the Victory Square/Woodward's area of Downtown Vancouver. In 1998, he became Coordinator of the City’s BIA Program, and in the following year became an ex officio Director of BIABC. Peter continues his role with business districts and small business as part of the Economic Development Planning team formed in 2019. Recent projects include the Retail-Commercial District Small Business Study and the Employment Lands and Economy Review. As Program Lead for the Program, he has overseen expansion of the Program from 5 s to currently 22 BIAs, and has witnessed almost every aspect of BIA activities.

Colleen Van Mook is the Executive Director for Downtown Prince George, which is a non-profit society serving all the tenants and property owners in the Downtown C1 Zone. Colleen is proud to support the Board in their vision to support and grow the economic vitality and energy in Prince George’s downtown. Taking responsibility for the day to day operations and ensuring the implementation of programs, services and projects has been a rewarding role over the last five years.  Before that, Colleen spent 25 years working for the City of Prince George as a coordinator, supervisor, manager, and director. As the Director of Community Services, she was responsible for the operations of all recreation facilities and the delivery of programs & services. Her proudest accomplishment during that time was leading Prince George’s bid to host the 2015 Canada Winter Games.  She has been a consultant in the areas of strategic planning and leadership development and took on a senior volunteer role of Chair, Mission Services during the execution of the Canada Winter Games.  In her role with Downtown Prince George she has been able to join a passionate Board and an amazing array of over 500 downtown businesses; along with committed partners and supporters to improve and promote downtown.  Colleen and her husband Bert along with their two adult children, have been proud to call Prince George their home for over 31 years. Colleen enjoys, running, golf and working out at the YMCA in her spare time.

With more than 35 years as a senior executive in the social profit sector, Lori  established Lori Baxter Consulting in 2010. Her client base includes a broad range of social profit organizations and local governments, including BIABC. Prior to establishing her business, Lori served as Director of Arts at 2010 Legacies Now, a partner organization of the Vancouver Organizing Committee for the 2010 Olympic and Paralympic Winter Games. For ten years she was the Executive Director of the Greater Vancouver Alliance for Arts and Culture, where she worked extensively in advocacy efforts at all levels of government, as well as with the business community and the general public. Lori is Past-President of the board of trustees of PAL – Vancouver. Previous board experience includes the Canadian Conference of the Arts, Tourism Vancouver and the Leon and Thea Koerner Foundation.